Welcome to the Friday Loose Bloggers Consortium where Anu, Ashok, Conrad, Delirious, gaelikaa, Grannymar, Ramana and I write on the same topic. Please do visit the linked blogs to get different views of the prism, colours of the same topic. Today’s topic has been chosen by Conrad.

I have chosen a Tamil hero because I feel that we in India know a lot about British, American and world history and its heroes. Sadly, people in the West hardly get an exposure to Indian tales and its heroes. I am just reading a book–Andrew M Greeley “Irish Love” about the English inequities in Ireland in the 18th century and I find a lot of resonance with what India went through.

Kattabomman was a folk hero who became the pivot for the idea of Tamil nationhood. His story is celebrated in many legends and epic poetry in Tamil. Kattabomman is acknowledged as one of the earliest independence fighters opposing the British and has been hailed as the inspiration behind the first battle of independence of 1857, called the Sepoy Mutiny.

Kattabomman (3 January 1760 to 16 October 1799) became a cult figure after the famous Tamil movie star Sivaji Ganesan essayed his role. Generations have grown up reciting the stirring dialogues and soliloquys spoken by the hero. My brothers were the actors who brought the screen hero live to us at home. Ramana, Arvind and Barath would go for a movie and the that night, after dinner, with my father and mother away at some social do, they woulkd enact the whole movie with dialogues, sword fights and songs. Today when I look back their total recall after one show is truly amazing. 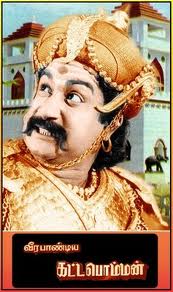 Back to Veera (brave), Pandia (belonging to the Pandya Raja clan of Madurai)  Kattabomman (literally the stiff, wooden figure). The polygar chieftain from Panchalankurichi was one of the earliest to oppose British rule and he waged a war with the British six decades before the Sepoy mutiny of 1857that the North Indians for many years claimed to be the first uprising in the battle of Independence.

The legend of Panchalankurichi says that during a hunting trip into the nearby forests one of the Kattabommans was amazed to see a hare chasing seven hounds. Believing that the land possessed the power to instil courage in his people, he built his fort there and named it Panchalankurichi.

On February 2, 1790, Veera Pandia Kattabomman, 30 became the 47th ruler of the region. They were Palayakarrars/Polygars, who had to administer their territories, collect taxes, run the local judiciary, and maintain a battalion of troops on behalf of the Naicker rulers of Madurai. Their function was a mixture of military governance and civil administration. The Nayak rule in Madurai controlling entire West Tamil Nadu gave in to Chanda Sahib of Arcot who seized the Madurai throne in 1736 from the last queen of Madurai in an act of treason. Chanda Sahib was later killed after the Carnatic Wars and the territory came under the Nawab of Arcot. The Palaya-karrars refused to recognize the new Muslim ruler and drove the Nawab of Arcot to bankruptcy. The Nawab had also indulged in lavish and luxurious living.

Finally the Nawab had to borrow huge sums from the British East India Company, that erupted as a scandal in the British Parliament. The Nawab of Arcot finally gave the British the right to collect taxes and levies from the southern region in lieu of the money he had borrowed. The East India Company took advantage of the situation and plundered all the wealth of the people in the name of tax collection. They even leased the country in 1750’s to a savage warrior Muhammed Yusuf Khan (alias Marutha Nayagam), who defeated and killed many of the Polygars and later got himself killed by the Arcot – British forces.

When many of the Polygars submitted to paying levies to the British, Kattabomman and a few others formed an alliance. He also refused to meet Jackson Durai (Lord), the Collector of the East India Company. Finally, his meeting with Jackson became violent and in the resulting skirmish, the Deputy Commandant of the Company’s forces, Clarke was slain. Kattabomman and his men fought their way to freedom and safety, but Thanapathi Pillai, Kattabomman’s secretary was taken prisoner. A Commission of Enquiry fixed the blame on Jackson and relieved him of his post. It was felt that the Company’s plan to take over the entire country was jeopardised

The new Collector of Tirunelveli wrote to Kattabomman calling him for a meeting on 16 March 1799. Kattabomman cited extreme drought conditions for the delay in payment of dues and also demanded that all that was robbed off him at Ramanathapuram be restored to him. The Collector wanted the ruling house of Sethupathis to prevent Kattabomman from aligning himself with the enemies of the Company and decided to attack Kattabomman. The British also instigated Kattabomman’s feuding neighbor Ettayapuram Poligar to attack him to solve territorial disputes.

Kattabomman refused to meet the Collector and a fight broke out. Under Major Bannerman, the army stood at all the four entrances of Panchalankurichi’s fort. At the southern end, Lieutenant Collins was on the attack. When the fort’s southern doors opened, Kattabomman and his forces audaciously attacked the corps stationed at the back of his fort, and slew their commander Lt. Collins.

The British after suffering heavy losses, decided to wait for reinforcements and heavy artillery from Palayamkottai. Sensing that his fort could not survive a barrage from heavy cannons, Kattabomman left the fort that night. A price was set on Kattabomman’s head. Thanapathi Pillai and 16 others were taken prisoners. Thanapathi Pillai was executed and his head perched on a bamboo pole was displayed at Panchalankurichi to demoralise the fighters. Soundra Pandian Nayak, another rebel leader, was brutally done to death by having his head dashed against a village wall.

The Fort of Panchalankurichi was razed to the ground and all of Kattabomman’s wealth was looted by the English soldiers. Few years later, after the second Polygar war, the site of the captured fort was ploughed up and sowed with castor oil and salt so that it should never again be inhabited by the orders of the colonial government. The word Ettappan is still used in Tamil to denote a traitor!

Chevalier Sivaji Ganesan acted in the lead role of Veerapandiya Kattabomman. The Movie was directed by B.R. Panthulu. Sivaji Ganesan got international recognition and received many awards for his electrifying performance that is most remembered  in his 45 years in filmdom. The film declared best film at the Cairo International Film Festival and Sivaji received the best actor prize from Col. Nasser, the then President of Egypt.

Even today, children recite his dialogues in oratorial contests.

You could call me Dame Quixote! I tilt at windmills. I have an opinion on most matters. What I don't have, my husband Raju has in plenty. Writer and story teller, columnist and contributer of articles, blogs, poems, travelogues and essays to Chennai newspapers, national magazines and websites, I review and edit books for publishers and have specialized as a Culinary Editor and contributed content, edited and collaborated on Cookbooks. My other major interest used to be acting on Tamil and English stage, Indian cinema and TV. I am a wordsmith, a voracious reader, crossword buff and write about India's heritage, culture and traditions. I am interested in Vedanta nowadays. I am now an Armchair traveller/opinionator/busybody!
View all posts by padmum →
This entry was posted in Friday Three On One blog. Bookmark the permalink.