Listen…
to the Cuckoo

I live in the heart of the city ina 3rd  floor apartment with two sides open. Just next to my south facing bedroom windowis an old bungalow full of trees. It was run as a boutique coffee shop by my friend Kiran and was full of life and comings and goings. Then due to a family fight she lost control of the building and had to move out. The place has returned to its derelict status again!

This building was euphemistically called Jeypore Palace (built by a small tin pot Raja from Andhra Pradesh) and was the scene of many a rambling with our dog Kaiser in our childhood. This was the area where we grew up and I have come back to it again. The trees are tall and inhabited by birds, squirrels and all kinds of creatures.

It is Saturday morning. As I write this blog, the area is relatively quiet and I can hear a squirrel squeaking away and an energetic cuckoo crying out as it is cloudy. In India we say

when the cuckoo calls it is a harbinger of rain….and it is raining every night…sporadic
showers.

I inevitably wake up between 3 and 4 AM for a ‘chucker’ around the house to get the circulation moving in my feet …I sometimes suffer from restless leg syndrome! I eat a cracker biscuit as the salt helps with the blood circulation. It is then that that my neighbour, an owl, hoots emphatically. Maybe he spies mice running around at that time.

I go back to bed and wake up…not to birdsong…(no comments about by 7+ waking up time please as I have earned the right to do so!) but the cacophony of school buses, impatient car drivers and two wheelers dropping off kids at school and the raucous sound of reversing vehicles that play film music! The area is surrounded by many schools and there are half an hour periods during the weekdays when this area becomes traffic snarled.

I also have few neighbours who run hotels—from 5 Star ones to eateries and lodges! They come in at all odd times…mostly after 12 midnight. The 5 star family across the road throws parties and have drunk brawls once in a way. That wakes me up too and their taxis pick them up at all odd hours to go to the airport.

Going back to the cuckoo ….a family of crows built a nest in a tree next door, laid and 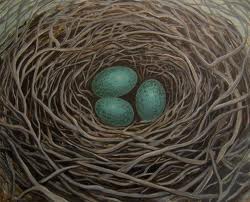 hatched eggs, brought up the fledglings and have flown away. The nest lies empty and I am waiting for the cuckoo to move in to lay her eggs and bring up a family. Will she? She is still cooing away in another tree in the front of my house.

This is my version of the Friday Loose Bloggers Consortium where Akanksha, Anu, Ashok, Conrad, Delirious, gaelikaa, Grannymar, Magpie11, Maria the Silver Fox, Rummuser , Will knot and I write the same topic. Please do visit the linked blogs to get different views of the
prism, colours of the same topic.

Today’s topic has been chosen by Grannymar! I am listening to you Oh one-who-listens-with-patience!

You could call me Dame Quixote! I tilt at windmills. I have an opinion on most matters. What I don't have, my husband Raju has in plenty. Writer and story teller, columnist and contributer of articles, blogs, poems, travelogues and essays to Chennai newspapers, national magazines and websites, I review and edit books for publishers and have specialized as a Culinary Editor and contributed content, edited and collaborated on Cookbooks. My other major interest used to be acting on Tamil and English stage, Indian cinema and TV. I am a wordsmith, a voracious reader, crossword buff and write about India's heritage, culture and traditions. I am interested in Vedanta nowadays. I am now an Armchair traveller/opinionator/busybody!
View all posts by padmum →
This entry was posted in Environment, Friday Three On One blog, Uncategorized. Bookmark the permalink.

12 Responses to LISTEN–to the Cuckoo