Posted on April 24, 2020 by padmum
Hero worship is  an expression that came into usage only 400 or 500 years ago. Hero is a person of extraordinary courage, admired for bravery and or noble qualities. There was a time when children were brought up by parents on the stories of legendary  characters from history and mythology. Such stories inculcated a sense of admiration and an urge to emulate similar qualities. While recent heroes  were seen as persons of extraordinary traits, ancient ones were gradually raised to the status of incarnations of God. Buddha was one such personality. Even Gandhi may some day be portrayed as a god.
The expression is abused today. There are more reel life heroes than real life ones. Crowds used to throng in front of film star NTR’s (A star from the Telugu world of Andhra Pradesh) bungalow. Rural folk visited him after seeing his role as Krishna and Rama in films and performed Puja and Aarathi  with camphor, coconuts and flowers. 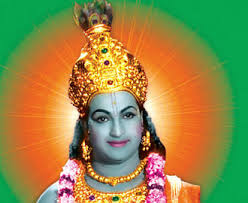 MGR, from Tamil cinema was a larger than life personality who strode both the worlds of cinema and politics like a Colossus. MGR was a god for his followers. He truly deserved the status of real life hero as he practiced many qualities that he portrayed in films. He was the Robin Hood, the champion of the downtrodden.

Rajnikant today has international fans. They  perform religious rituals in front of his huge cut-outs and observe fasts on the day of the release of his films.

NTR and Rajni were dignified personalities with some qualities worth admiring and emulating. There are some others who have no such such qualities and are yet hero worshipped for their ‘style’ and odd behaviour. A worshipper of Kushboo erected a temple with her idol as goddess. Pran, the archtypal villain of Hindi movies, was a hero to his worshippers for generating rings of smoke after taking a puff of a cigarette. Unfortunately far too many youngsters have fallen victim to the smoking habit, inspired by celluloid heroes.
Politicians too have emerged, with a few Honorable exceptions, as undesirable heroes to their young worshippers. Often youngsters abandon their studies and serious pursuit of future and start to take instructions from unscrupulous politicians who have their own agenda. These sidekicks are hated by most people.
Thankfully in most cases, unmerited hero-worship is short-lived and vanishes after a while when the victim discovers the truth and gets disenchanted.
Conclusion: Hero worship is not necessarily evil.
Natarajan

This is my take on this week’s Friday 5 On 1 blog post topic. The other four bloggers who write on the same topic every Friday are Shackman, Conrad, Ramana and Sanjanaah.

Please do go over to their respective blogs to see what they have to say on the topic.

You could call me Dame Quixote! I tilt at windmills. I have an opinion on most matters. What I don't have, my husband Raju has in plenty. Writer and story teller, columnist and contributer of articles, blogs, poems, travelogues and essays to Chennai newspapers, national magazines and websites, I review and edit books for publishers and have specialized as a Culinary Editor and contributed content, edited and collaborated on Cookbooks. My other major interest used to be acting on Tamil and English stage, Indian cinema and TV. I am a wordsmith, a voracious reader, crossword buff and write about India's heritage, culture and traditions. I am interested in Vedanta nowadays. I am now an Armchair traveller/opinionator/busybody!
View all posts by padmum →
This entry was posted in Current Events, Prof Natarajan's Blogs, Society and tagged btavery, Gandhi, hero, Hero worship, legendary Buddha, MGR, NTR, Rajnikant. Bookmark the permalink.

2 Responses to HERO WORSHIP I