OVER -CONFIDENCE–positive or negative quality

Is over confidence a positive or negative quality? It all depends on the situation in which it is exhibited….over confidence can be self-assurance or bravado verging on dangerous behaviour.

As a family, we four siblings have always had superb self-confidence and have never let any situation get the better of us. We have a saying in Tamizh…”Even after falling flat on his face, the man will get up and say…ah…there is no dust/mud sticking to my mustache!” That is the epitome of over confidence for me.

We grew up with many different people influencing our lives. The most prominent of this motley crowd was our father’s younger brother, PK as he was called. His education was minimal but he (and our father) was groomed by an Englishman Arundale who was in the Theosophical Society in Madras. He was an ace salesman and this was validated many years later when I made new friends with an ex-colleague of his, Narayanan who said, “We were always a bit scared of PK coming back after a sales trip. His confidence levels were something else. We never knew what he had sold..he was the classic example of a man who could sell ice to Eskimos!” This was also the first time that I heard this metaphor. PK went through many ups and downs but his demeanour was always bright and confident. Nothing ever fased him.

From a real person, to a figure who has had a huge impact on the Indian psyche…Hanuman, son of the wind God. We start our prayer cycles with Lord Ganesha, the elephant headed deity who is the epitome of knowledge and wisdom. He removes obstacles in our way and makes life easier to live. Hanuman ends the prayer cycle, for he is the very breath in our bodies.

Lord Hanuman is the divine monkey (vanara) companion of Lord Rama, an avatara or reincarnation of Lord Vishnu. Hanuman is a central character of the epic Ramayana. He is a Brahmachari, a life long celibate and considered to be Chiranjeevi..one who lives on forever. He appears in many stories such as the epic Mahabharata and the various Puranas. Hanuman is the son of Anjani and Kesari and considered to be the son of the wind-god Vayu, who according to several stories, played a role in his birth. 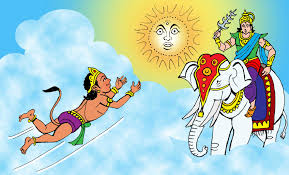 A story is told about the supreme confidence that Hanuman had in his prowess. It was not an in-your-face arrogance, but a quiet acceptance of his physical powers. According to Valmiki’s Ramayana, Hanuman the child was hungry and saw the rising red colored sun. Mistaking it for a ripe fruit, he leapt up to eat it, totally confident that he would be able to reach the sun. Many stories relate about his resuscitation and one version says that the king of gods Indra intervened and struck Hanuman with his thunderbolt. It hit Hanuman on his jaw, and he fell to the earth unconscious with a broken jaw. Vayu, the wind God took umbrage and ceased his activity leaving the whole of creation breathless. Lord Shiva then intervened and revived Hanuman and Vayu returned to the living beings.

Later in the epic, when a person is chosen to fly across the seas to Srilanka to search for the kidnapped Seetha, wife of Rama, it is Hanuman. He has supreme confidence in his powers to cross the seas and this one act of his has made him the icon for confidence, strength and valour in the Indian mind. So when we want to be endowed with confidence to achieve anything, it is Hanuman to whom we pray.

There is a wonderful Zen story… After winning several archery contests, the young and rather boastful champion challenged a Zen master who was renowned for his skill as an archer. The young man demonstrated remarkable technical proficiency when he hit a distant bull’s eye on his first try, and then split that arrow with his second shot.

After winning several archery contests, the young and rather boastful champion challenged a Zen master who was renowned for his skill as an archer. The young man demonstrated remarkable technical proficiency when he hit a distant bull’s eye on his first try, and then split that arrow with his second shot.

Undisturbed, the master did not draw his bow, but rather motioned for the young archer to follow him up the mountain. Curious about the old fellow’s intentions, the champion followed him high into the mountain until they reached a deep chasm spanned by a rather flimsy and shaky log.

Calmly stepping out onto the middle of the unsteady and certainly perilous bridge, the old master picked a tree that a was at a distance as a target, drew his bow, and fired a clean, direct hit. ‘Now it is your turn,’ he said as he gracefully stepped back onto the safe ground.

Staring with terror into the seemingly bottomless and beckoning abyss, the young man could not force himself to step out onto the log, no less shoot at a target. ‘You have much skill with your bow,’ the master said, sensing his challenger’s predicament, ‘but you have little skill with the mind that lets loose the shot.’ The confidence of the learned master took away his fear. The student was just bravado!

This is my take on this week’s Friday 5 On 1 blog post topic. The other four bloggers who write on the same topic every Friday are Shackman, Conrad, Ramana, Sanjanaah and Prof.Natarajan.

Please do go over to their respective blogs to see with what confidence they write on this topic.

You could call me Dame Quixote! I tilt at windmills. I have an opinion on most matters. What I don't have, my husband Raju has in plenty. Writer and story teller, columnist and contributer of articles, blogs, poems, travelogues and essays to Chennai newspapers, national magazines and websites, I review and edit books for publishers and have specialized as a Culinary Editor and contributed content, edited and collaborated on Cookbooks. My other major interest used to be acting on Tamil and English stage, Indian cinema and TV. I am a wordsmith, a voracious reader, crossword buff and write about India's heritage, culture and traditions. I am interested in Vedanta nowadays. I am now an Armchair traveller/opinionator/busybody!
View all posts by padmum →
This entry was posted in Current Events, Friday Three On One blog, Heritage, Life skills, Society, Spirituality, Zen and tagged archer, chasm, confidence, disciple, Hanuman, Indra, master, mustache, over-confidence, Rama, Ramayana, strength, sun, thunderbolt, valour, Vayu, Zen. Bookmark the permalink.

4 Responses to OVER -CONFIDENCE–positive or negative quality